Peter received many gifts – a teddy bear…a piggy bank…Peter Saves for A Rainy Day is the first in a series of children’s books to educate and inspire children to Save for a Rainy Day.

The wreckage of a World War II plane is found in the mountains of Appalachia. It mysteriously crashed in 1943 on its way to a naval base. Inside the plane is a note, written by Annie Tillery’s great-grandmother, Charlotte, who was in love with a fighter pilot. Young Charlotte tested the planes and flew them to naval bases; her fiancé flew the planes in battle.

While investigating the crash site, NCIS finds the note in the plane, which they trace to Charlotte and then to her surviving family members, Annie and her mother Carol. The mystery begins. Why did the plane crash, and what does Charlotte’s note mean? Annie and her mother decide to dig into Great-Grandmother’s past by way of the aged family attic.

There, they find love letters written by Charlotte and her Navy pilot fiancé. There is a code to be broken in those letters and The Mystery of the Lost Avenger to be solved. As they explore, Annie suspects Charlotte’s ghost is reaching out to tell her something, but what? She enlists the help of her boyfriend, newly licensed pilot Ty Egan, but Annie feels she may be the key to her great-grandmother’s top-secret life. 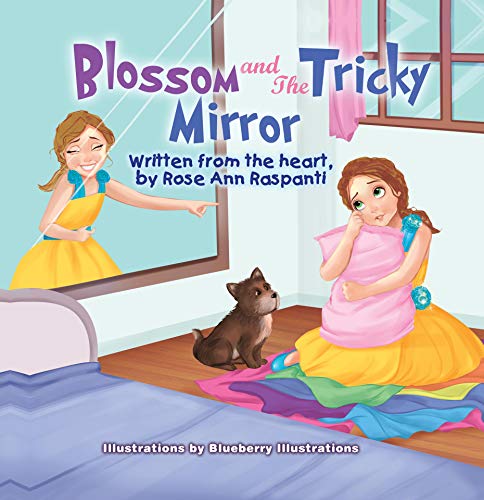 Blossom and The Tricky Mirror is a heartwarming story about a young girl’s journey to overcome self-doubt as she learns the importance of self-compassion. Blossom’s is celebrating her birthday with a big party, yet as her guests arrive she is overcome with insecurity and self doubt. Readers will be moved by Blossom’s struggle and celebrate her triumph as she overcomes her fear and sees her true reflection in that tricky mirror. Blossom will empower children and adults to think kind self thoughts and see spirit and beauty mirrored back.

That Bully in My Head

That Bully in My Head was rude and quite the pest;
It chitter chattered night and day and never took a rest.

The things it said were horrible, yes it was awfully mean;
A sneaky little coward – heard but never seen.

That bully thought it knew me, pretended to be on my side;
I started to believe it, then heard it laughing as I cried.

I mentioned it to my parents just the other day;
I was a little nervous – but found the courage anyway.

They did not seem a bit surprised – and quickly calmed my fear;
Daddy knelt on bent knee and whispered in my ear.

Daddy says he knows that bully, but it has a different voice;
Then Mommy said I should NEVER believe it and that I have a choice.

So now I’ve learned to shut it up with kind words in my head;
That bully has lost its power – And now I listen to myself instead.

The Nassau County Police Department was created in 1925 out of an urgent need for a professional law enforcement agency to provide swift, reliable, and trusted protection for its citizens. During those unprecedented times, Greater New York was rapidly encroaching on Nassau County’s western border, and the escalating crime rate in this bucolic island setting was due in large part to the Volstead Act, which ushered in the mob-infused Roaring Twenties, with its related violent and turbulent unrest. After the rebellious 1920s and the Great Depression followed a long dark period of global hostilities and impending threats of homeland invasions from foreign enemies in World War II. The founding members of this department, equipped with little other than their dedication, bravery, fortitude, and self-sacrifices, established a strong foundation for one of the finest police departments in the country today.