Join us with authors AnnMarie Knorr-Fischer and Rony Kessler. 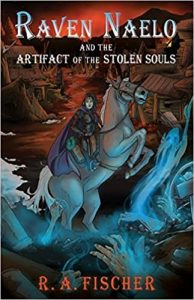 AnnMarie Knorr-Fischer – author of “Raven Naelo and the Artifact of the Stolen Souls”, co-authored by R.A. Fischer –  Raven Naelo’s father was viciously decapitated. But that didn’t stop the young half-Elf from following in his footsteps. To strengthen her abilities as a rogue, she was granted permission, as well with others, to train with the Realm Guardian.

While the new recruits are secluded at training camp, an evil force from the Abyss has invaded the Mortal Realm. With the assistance of a ruthless necromancer, wielding an ancient artifact, he now has the power to raise more than just the dead.

Will the new Protectors set aside their differences to be ready in time? Or will the living and the dead never find peace…

Rony Kessler, author of “The Mysterious Animal Soup and Rachel’s Gifts” – Rachel, a young girl, survives a horrible crime and loses her voice, but not her determination to solve the tragedy that has befallen her family. Rony Kessler’s novel that occurs in both the US and the Middle East, is a riveting page-turner, that pits Rachel a Twelve-year-old, against a gang of thugs that attacked her family. “The Mysterious Animal Soup, and Rachel’s Gifts” follows the short prequel “The Professor and the Wild Dogs”.