Join us for an on-the-air book launch with authors Alvin Billings, Ann Chiappetta and Robert McNally. 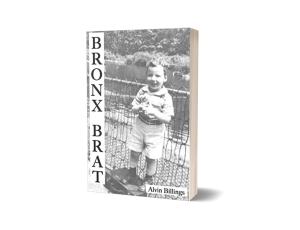 Alvin Billings, launching his new release “Bronx Brat” – This is the story of Bernie, a Brat born and raised in the Bronx His story unfolds in the Bronx of the 1940s and 50s—a colorful mosaic of Italian, Irish and Jewish families. Local parks (especially the Bronx Zoo and Botanical Garden) were peaceful oases from crowded Bronx apartment houses. Bernie was highly intelligent and sought adult-level knowledge in local libraries. He had fierce protective love for his two younger sisters and a brother. His loving, but weak father surrendered to a dominant mother who kept control with screaming paranoia. Bernie related to World War 2 with a precocious understanding of current events and military strategy taught to him by his grandfather. He hid his learning from others and his teachers in order to ‘fit in’. Bernie’s escapades were in the tradition of Tom Sawyer and Huck Finn. He showed both bravery and bravado by saving his Dad’s life at age ten. That same year, he joined a secret American branch of the Haganah to send guns, disguised as toys, to Israel. They were packed with greeting cards to Israeli children. Finally, a shocking family tragedy confronted Bernie as he reached adulthood and entered the working world, never to live as a Bronx Brat again. 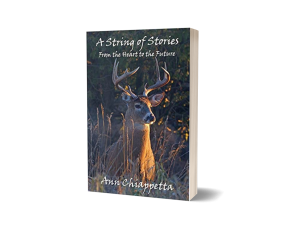 Ann Chiappetta, author of “A String of Stories: From the Heart to the Future” – A demon deer and a ghost cat. Sibling rivalry and sexual awakening. Self-image and self-confidence. The chance for an offworlder to breathe free at last on a new planet. Those are just some of the diverse themes of these remarkable stories. Some endings are happy, some are sad, and some are intriguingly open-ended. But once you step inside the author’s world, you cannot emerge unmoved. This collection includes general fiction, science fiction, suspense, and paranormal pieces. Some, like “Lafayette 10,” are crossovers. Others, like “Bad Medicine,” stay true to the genre for which they were originally written. There is a romantic theme to some, and all are character-driven. The three paranormal shorts are based on personal experiences. There are stories here that will appeal to many different types of readers, and that there’s at least one story for each reader. Short stories challenge the writer as much as, if not more than, a full–length book. 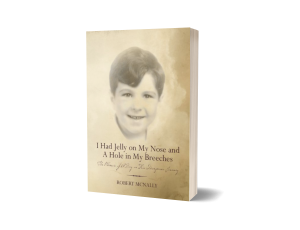 Robert McNally, author of “I Had Jelly on My Nose and A Hole in My Breeches: The Memory of A Boy on his Dangerous Journey” – This is the memoir of a modern-day Huckleberry Finn who delighted in youthful romances and wild adventures. His earliest memories are about living next door to a crematory and across the street from a cemetery on top of a hill during the Great Depression. This was perfectly normal to a child who had yet to reach the age of four. For an older child, this God-forsaken region might have seemed frightening, especially when witnessing the daily wanderings of Gypsies, beggars and hobos. For this youngster, these characters were a sight for sore eyes. The author has many interesting stories about the 1930’s and 40’s. For instance, one evening in 1945 he and his friends built a fire in a parking lot. The next day they returned to the area only to discover something terrible and startling in the burned-out fire. The adventures are exciting, humorous and well worth reading. You’ll have the feeling you are right there with him. Let the author take you on his dangerous journey.