Join us for our first “Between the Covers” book launch celebration, with author Kieran Larkin and his new book “Messengers of God: A Survey of Old Testament Prophets”, along with guests Br. John McGrory from Chaminade High School and Elyse Hayes, librarian from the Seminary of the Immaculate Conception. 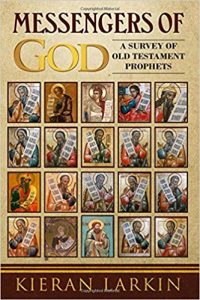 Ordinary people are sometimes called to do extraordinary things – and when that call comes from God, well, “extraordinary” is raised to the highest heights! Throughout the Old Testament, God chose a number of common folk – farmers, priests, herders, even children – to deliver messages to His People. Sometimes these messages were words of encouragement, other times they were words of accusation and condemnation. But either way, His chosen messengers were often placed in awkward, difficult, and even life-threatening situations as they addressed audiences that were either apathetic or openly hostile. These pages tell their stories, ranging from the heroic to the horrific, from the inspirational to the incredulous. Yesterday’s heroes with messages for today.