Join us with authors Bill Boggs and Aleisha Brooks. 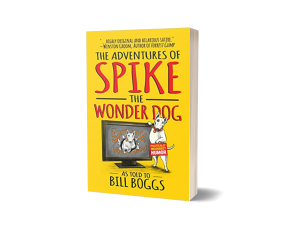 Bill Boggs, author of “The Adventures of Spike the Wonder Dog” – Spike is an English Bull Terrier with a keen comedic eye for human foibles. He rockets to TV and internet fame after appearing on The Tonight Show with Jimmy Fallon, along with his master Bud, who hosts a local morning show in High Point, North Carolina. Spike and Bud soon hit the fast track to bigger stardom when Bud signs on for a talk show in New York City.   They embark on an endless stream of mind-boggling adventures that include the world’s first topless theme park, a Rabbi promoting Christmas shows, and a Yogi who discovers Spike’s comical talent for teaching Transcendental Meditation. Spike’s pop culture fame and the A-list crowd he mingles within Manhattan exact a potentially fatal price. Dangerous forces enact a scheme to snatch the famous wonder dog and plunge him into an international dogfighting ring. The brash, athletic, sardonic, honest, and hilarious Spike will capture the hearts of readers who enjoy a character who tells it like it is. They will fall in step with his eye-rolling observations and root for this underdog of a wonder dog. A category unto itself, Spike is not a cartoon version of dogs acting human, but rather a charming portrayal of the human-like, spunky, and passionate mind of a dog. Spike calls to mind the cultural icon Rocky Balboa as he goes into battle armed with humor and guile as well as the ancient, but never tested, skills of his breed. Will they be enough to enable him to survive? 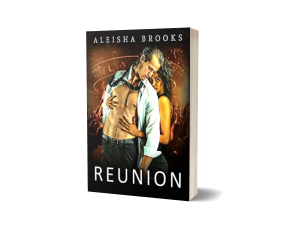 Aleisha Brooks, author of “Reunion” – Cleo Martin walked into her twentieth High School reunion like she was walking into the Academy Awards. She was going to turn heads tonight at her reunion, even if they were balding ones. High School had been traumatic. She was not the beautiful, sexy, sophisticated, and confident woman she is now. She was a geek, a very sexually frustrated geek. She grew up not really knowing her mother, or what happened to her. She was raised by her father, and although he did everything he could to make a good life for her, she had no female role model to turn to in times of need. Now, everything was different. She had been estranged from her father for ten years, she took a lover, she became an art curator. She started the careers of many hot L.A. artists. She was at the top of her game. Then, she saw him. Billy Pope. This reunion was about to get very hot.

Having trouble with writers’ block? Aleisha has a great series of FREE videos on conquering writers’ block here: https://www.youtube.com/playlist?list=PLWK_248zVMhBbubg-lRsv76q20uWfJCvp