Join us for this episode with author Antoinette Truglio Martin, filming an on-the-air book club discussion of her new book Daily Bread with a very special group of middle schoolers, the Junior Bookworm Club. 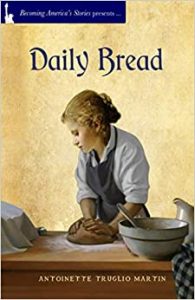 Antoinette Truglio Martin, author of “Daily Bread” – It is 1911. Crammed into a three-room flat in a Mott Street tenement, the large Taglia family needs all the help they can muster. Spunky songbird Lily wants to help by baking Daily Bread at the bakery like big sister, Margaret. But Margaret says Lily is just a little kid, and there is more to baking Daily Bread than height and an artist’s heart. Lily learns to navigate in a grown-up world when facing bullies, disasters, dotty bakers, and treacherous streets to cross by herself.

Antoinette Truglio Martin is a speech therapist and special education teacher by training but really wants to be a writer when she grows up. She has been collecting, writing, and fashioning stories forever. Over the years Antoinette had been a regular columnist in local periodicals and had several essays featured in newsletters and literary reviews. Her children’s picture book, Famous Seaweed Soup was published in 1993 (Albert Whitman Co.). Antoinette’s memoir, Hug Everyone You Know: A Year of Community, Courage, and Cancer (She Writes Press 2017), chronicles her first year battling breast cancer as a wimpy patient. She proudly holds an MFA in Creative Writing and Literature from Stony Brook/Southampton University (2016).