Congratulations to author Pauli Rose Libsohn, winner of The First Place 2020 Best Northshore Author!  Pauli Rose Libsohn, who has worked at Rallye Motors in Roslyn for the past 39 years, launched her literary career in 2014, when she arranged and edited a book of poems by her mother, Mitzi Libsohn, that marked the first book published by either of them. Her latest effort includes romantic poetry that her parents wrote to each other in greeting cards from 1945 on, along with Pauli’s own thoughts.

Bernadette Walsh, author of “The Reluctant Witch” – Two powerful witches, two powerful stories in one book. Fiona Morrissey learned from an early age not to trust her magical powers and certainly not to trust the spirits her “gifts” allowed her to see. Mama always said, “Spirits may act like they are giving you something, but they will take from you a hundredfold anything they give you. Spirits always want something and are not to be trusted.”Being a good girl, Fiona followed her mother’s advice and for years steered clear of spirits and magic. That is until the spirit of gorgeous John Callahan, Fiona’s ex-boyfriend and the only man she ever truly loved, decided to camp outside her door. Now Fiona must decide, can she trust the spirit of her beloved boyfriend or was John like all the other selfish and dangerous spirits her mother warned her about? FOLLOW MEDNA is destiny. Or is it? Nell Donahue was born an echo witch — a weak witch with just enough magic in her to read the tea leaves of bored suburban housewives. Nell’s spent her life envying her more gifted sister and chasing magical powers she could never attain until an unexpected trip to hell increased Nell’s abilities ten-fold. Now Nell has more powers than she ever dreamed of. She’s also being haunted by the ghost of a slain college student, threatened by a pack of semi-human demon-worshipping ghouls and harassed by a brawny detective who’s awakened something in unlucky-in- love Nell that she’d much prefer remained dormant. Too late to return to her status as an echo witch, Nell must learn to harness her enhanced powers before she loses everything, including her heart. 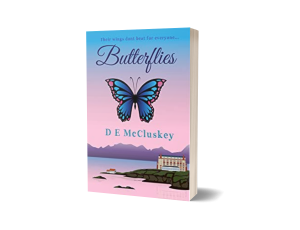 D E McCluskey, author of “Butterflies” – Olivia Martelle has it all. She’s young and beautiful and has just had her fairy-tale wedding to the man of her dreams, the man who makes the butterflies in her stomach swoop and swirl. Life is looking rosy indeed. Then, a cruel twist of fate changes everything. After a devastating accident, every day seems to be a battle—with doctors, with her sister-in-law, with herself. Her beautiful blue butterflies have turned to black. A desperate mistake leads her onto a path she doesn’t want to tread, and her life begins to spiral out of control. Will anything bring her butterflies back?